Yellowstone National Park happens to be the first-ever park to have been established in the world and not only the first in the USA. While it is a local visiting spot and picnic destination for the local crowd of the states, even tourists from abroad come to visit the park for the spectacular beauty it presents before their eyes. 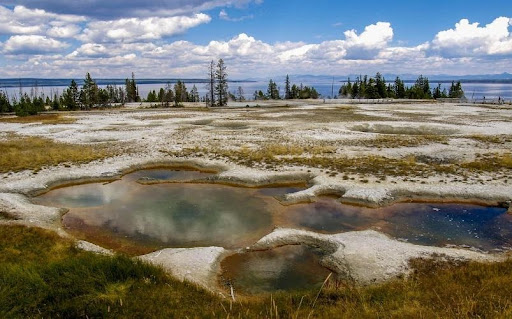 Trying to cover the whole of the USA for tourism is a Herculean task and cannot be achieved in a single tour (of course if you are not a Vagabond!). But what if someone informed you about the right places to visit as per your liking or charted out a plan for you so that you can navigate through the USA covering important tourist destinations on your tour? To lessen your worry about scaling the states, we have brought to you the topmost preferred location of tourists, both from the state and outside.

The abundance of species, the climate of the place, the scenic beauties it entails will forever be etched in your eyes once you experience it. You can even hire a tour guide to guide you to certain spots of historical importance or otherwise.

Here in this article today, we will be covering certain important details of the park that you might be curious to know before you visit the place. This way you will also have an idea of what your trip is going to look like. Please read through the passages below to come to terms with the first-ever park in the world - The Yellowstone National Park.

Be sure to not trip over the words and fall into the landscape of nature!

History of the park

11,000 years from today, the history of the Yellowstone National Park took birth. The period began with the invasion of native Americans who utilised the region for inhabitancy and the purpose of fishing and hunting during appropriate seasons. While the post office located in Gardener, Montana, was still under construction during the 1950s, an obsidian point was discovered in the region found to be of Clovis origin and dated back to approximately 11,000 years ago.

It is believed that the Paleo-Indians belonging to the Clovis tradition used considerable amounts of obsidian that was discovered in the park later. It was used by the dwellers to make sharp cutting tools and weapons for hunting and trade purposes. Out of the tools found, several arrowheads which are believed to be carved out of yellow stone obsidian has been discovered in the region, even extending to the regions of Mississippi Valley. This hints at the fact that there was some sort of obsidian trade going on between the various tribes of the east. It was only during the 1805 expedition by Lewis and Clark that the first-time white explorers who visited the region got in terms with the now-narrowing tribes called Nez Perce, Crow and Shoshone tribes. By this time, most of the tribes that once inhabited and flourished in Yellowstone National Park has ceased to exist or had dispersed individually to other regions of the world. 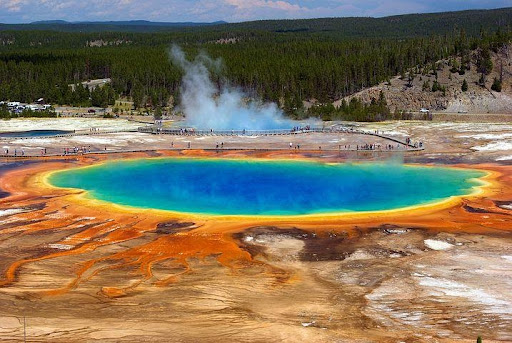 While the explorers crossed through present-day Montana, they heard about the place called the Yellowstone region to the south, but the expedition team at that time made no effort to discover the region. Eleven years hence to this incident in the year 1871, Ferdinand V. Hayden finally managed to scale the region of the Yellowstone National Park after his failed effort before. After his return from the expedition, Hayden drafted a well-detailed comprehensive report which included large photographs by William Henry Jackson and a few intricate paintings by Thomas Moran. These reports drafted by Hayden convinced the US Congress to reclaim this region of the Yellowstone National Park from public auction.

On March 1, 1872, the Art of Dedication was finally signed by then-President Ulysses S. Grant and the identity of the Yellowstone National Park finally came to life. During the crucial years of World War II, the number of tourists who visited the national park dropped sharply. Many staffs had to opt-out from their service and many facilities of the park fell beyond repair. Again, during the years of 1950, tourist visits rose to a significant number in both Yellowstone and other recognised national parks of the USA. To warmly welcome this huge influx of tourists, the park committee implemented Mission 66 which focused on the modernization and expansion of the park service facilities to maintain the blooming legacy of the park. While the aim was to complete this mission by the year 1966 (in memory of the place's 50th anniversary) Mission 66 took a little detour from constructing it into a traditional log cabin style to designs that were essentially modern in nature.

The much-talked-about expansive history of the park has been documented by nearly 1,000 archaeological sites. The park is known to house about 1,106 independent historic features and among these the Obsidian Cliff and five recognised buildings have been given the designation of National Historic Landmarks. Due to the abundance of the various flora and fauna that breathes in the region of the Yellowstone National Park, it has also been recognised as an International Biosphere Reserve on October 26, 1976, and it also happens to be a UN World Heritage site designated on September 6, 1978. Not just this, in the year 2010 the park was given the honour of having its own quarter which comes under the America the Beautiful Quarters Program.

ESTA US Visa Online is now available to be obtained by mobile phone or tablet or PC by email, without requiring a visit to local US Embassy. Also, US Visa Application Form is simplified to be completed online on this website in under 3 minutes.

Geology of the park

The Yellowstone National Park is located towards the North-eastern end of the Snake River. It is a u-shaped arc that navigates its way through the mountains and stretches from Boyce Idaho to the west, covering in between 400 miles (640 km). Did you know that the Yellowstone Caldera is also known to be the largest volcanic system to exist in the region of North America? Currently, its only competitor in the world is Lake Toba Caldera situated on Sumatra. The caldera has been coined the term super volcano because of its spectacularly large and volatile eruptions over the years. Beneath the land of Yellowstone lives its magma chamber which is estimated to be made of a single continued chamber of about 37 miles in length, 18 miles in width and approximately 327 miles in depth. 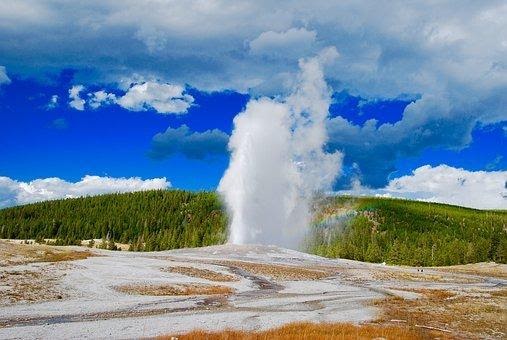 The most recent caldera eruption occurred due to a cataclysmic eruption that happened about 6,40,000 years ago and is known to have released about 240 cubic miles of ash, burnt rock and pyroclastic substances in the air. This eruption was calculated to be about 1000 times greater than the 1980 eruption which happened on Mount Saint Helens. However, this is not the only wonder the park harbours, it is also known for the most famous geysers, perhaps in the entire world.

You must have heard about the 'Old Faithful' geyser which is situated in the upper geyser basin? The region also inhabits the Beehive geyser, Lion geyser, Castle geyser, Giant geyser (the most popular voluminous geyser), the Grand geyser (presumably the world's tallest geyser) and the Riverside geyser. The park is home to one of the tallest and active geysers in the world - the Steamboat geyser situated in Norris Geyser Basin. A recent survey conducted in the year 2011 highlighted the fact that 1283 geysers have solely erupted on the land of Yellowstone.

Among these, an average of about 465 geysers is presumed to be active for a given year. Due to such extreme calamities happening in the region, the Yellowstone harbours about 10,000 thermal features in total, which includes mud pots, geysers, fumaroles and hot springs. Yellowstone also witnesses thousands of small/big earthquakes occurring every year; however, the magnitude is undetectable to the locals of the area. 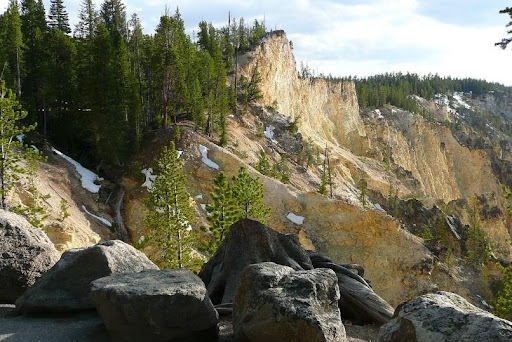 The soil of Yellowstone National Park is home to over 1700 odd species of trees and notable vascular plants. About 170 species are known to be exotic species and are not native of the place. Lodgepole Pine spreads to approximately 80% of the forest land and is among the eight identifiable conifer trees species in the region. Other known coniferous growing in the region are Engelmann spruce, Rocky Mountain Douglas fir, Whitebark pine and Subalpine fir found to be sporadically growing in the grooves of the park.

There are almost dozens of wayward species of flowering plants identified to have been flourishing in the region in May and September, specifically. One of the rare flowering plants found across the world is the Yellowstone Sand Verbena. About 8000 of these species are found to be blooming in the valleys of the park. They are also believed to a be close relative of the flowers that grow in warmer climates. Coming to the non-native plants that inhabit the region, it is believed that they threaten the source of nutrition of the native species by occupying space and continually growing in the area.

Read about the ESTA US Visa Online eligibility. 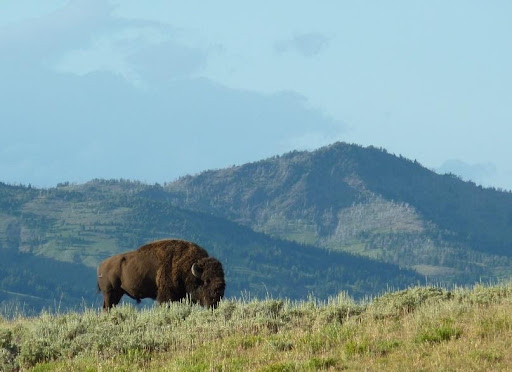 The fauna of Yellowstone National Park is home to about 60 different species of mammals which includes coyote, cougars Canadian lynx, Rocky Mountain wolf and black grizzly bears. The larger mammals include the buffalo, moose, mule deer, elk, white-tailed deer, bighorn sheep, prong horn, mountain goat and the largest of the herd in the whole of USA - the American Bison.

The enormous number of bison that populate the area is a concern for the local ranchers fearing that this species of the bison can transmit bovine diseases to other species of their domesticated cousins. Roughly half of the region's bison have been vulnerable to a bacterial disease called 'brucellosis' which entered the place through European cattle which might result in the cattle miscarrying. However, no cases have been reported of transmission of the disease from the wild bison to the domesticated cattle. There are also about 18 different species of fish thriving in the warm waters of Yellowstone which includes, the Yellowstone cut-throat trout.

READ MORE:
Best known as a family friendly city of America, the city of San Diego situated on the Pacific Coast of California is known for its pristine beaches, favourable climate and numerous family friendly attractions. Learn more at Must See Places in San Diego, California

If you are planning to take a trip to the Yellowstone National Park, kindly note that there will be no accommodation for public transport to avail inside the campus of the park. However, you can always contact several tour companies that provide self-guided motorised transportation. During winters, snowmobile tours are available to traverse over the lavishly spread-out snow in the area.

If you are planning to visit the Great Canyon, Old Faithful and Mammoth Hot areas of the park, know that these regions are generally very crowded, and the facilities are extremely busy during the month of summer. This sometimes results in traffic jams and long delays due to people crowding and watching wildlife. The National Park Service has the responsibility to maintain museums and visitor centres and is also responsible for maintaining the historical structures found in the area.

There are also about 2,000 odd buildings that require to be taken care of. These buildings are no ordinary structures, they include Fort Yellowstone (situated in Mammoth hot springs district) and the national historic landmarks such as the Old Faithful Inn which was constructed in the year 1903 to 1904. The option of camping is also available for tourists who are looking for some experience in the lap of nature, however, the option of mountaineering and hiking is not viable in this park because of the various active volcanoes that inhabit the region.

READ MORE:
Home to more than four hundred national parks spread across its fifty states, no list mentioning most astonishing parks in the United States may ever be complete. Read more at Travel Guide to Famous National Parks in USA